What Did You Do In The Trad Wars, Daddy?

In retrospect, it seems an 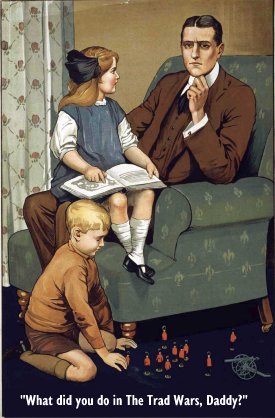 unlikely scenario. Followers of two distinct styles of music exchanging virulent verbal abuse and in some instancies  this even involving physical altercation. The war between the devotees of New Orleans Jazz and Modern jazz. Long before the famed accusation of 'Judas' aimed in the direction of Bob Dylan. During a concert presented by 'The Humphrey Littleton Band', who had  the temerity to introduce a saxophone into his line up, a cry from the audience of "Go home dirty bopper!"

Much like the current world,  well researched facts were ignored and reinterpreted to reinforce the belief system.

Traditional Jazz: Musicians did not have to learn their instruments but acquired what technique they possessed by a process of osmosis. Bands  perform seated. Saxophones were never to be seen or used until the 'Dirty Boppers' came along. (a cursory glance at contemporary photographs comprehensibly proved this opinion was fallacious) Arrangements were never employed. The music preferably rough, basic, and spontaneous. This deftly ignored Jelly Roll Morton and similarly highly skilled musicians. Pure jazz ceased to be around nineteen thirty-five.

Amazingly, in spite of a substantial body of evidence to the contrary, such attitudes continue to exist particularly amongst the now older individuals who developed their musical appreciation during these early conflicts. I had a communication with a man who urged, that within my listings on Jazz Clubs Worldwide, I should segregate Modern Jazz Clubs from Tradition Jazz Clubs. Another email express the well honed view that Modern Jazz is all is "all technique and no emotion". I resisted the urge to suggest he listened to the John Coltrane Ballads album. Rarely can you alter the mindset of the evangelical.

But it must be admitted that in spite of the blind and easily demolished absurdities, on both sides of the musical fence, people were at the very least passionate about the music and surely that was something to be valued.

The video: I had a fantasy about cutting a highly modern track onto a wax cylinder and then surreptitiously leaving it in some suburban London junk shop. This video is a partial fulfilment of that ambition.