A Touch Of The Red 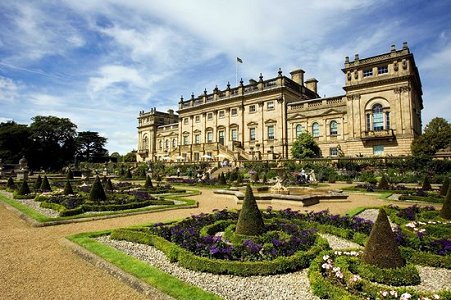 Many years ago I lived in small village in England. Every Friday evening I would go to a popular local pub. Frank and Ann were very particular about who they would welcome into their arena of hospitality. The bar, just one room, resembled the lounge of a private rather than a public house and the appropriate standards of personal conduct were assumed. Key to the popularity of The House were the wonderful home made Pie and Peas, when ordered,  were served up on a tray with bowls, cutlery, and condiment holders for salt and malt vinegar.

Our particular group of regulars were a mixed bunch. The Vice-principle of a local technical college, the head of a Comprehensive. Derek who worked in the heating sector, another, a well travelled gentlemen who owned a petrol station, plus sundry others.

During the course of one previous week I had visited Harewood House. Designed by architects John Carr and Robert Adam, it was built, between 1759 and 1771, for Edwin Lascelles, 1st Baron Harewood. The landscape was designed by Lancelot "Capability" Brown and spans 1,000 acres. It boasts, as one might expect all the grandeur and opulence of such an establishment.

I mentioned my visit to the Friday gathering.

"It was impressive. Worth seeing. However, it was impossible not to reflect on the fact that such magnificence was paid for by immeasurable human exportation and suffering".

There was a silence.

A couple of weeks later discovered, not directly, that I had been classified as being communist.

I have no particular political affiliations. I was stating an indisputable fact. Almost without exception the 'Stately Homes of England' were made possible by exploitation. In Feudal times and before. During earlier and later commercial expansion the wealth flowed in from sugar plantations, the slave trade, the beginnings of colonialism - the classic method of asset stripping. These facts are beyond dispute. Major cities, Liverpool, London Bristol, major beneficiaries. To state these facts is not to espouse a particular political creed but to be aware of the reality. No great wealth at any time in history was accumulated without the immeasurable suffering   of  others.