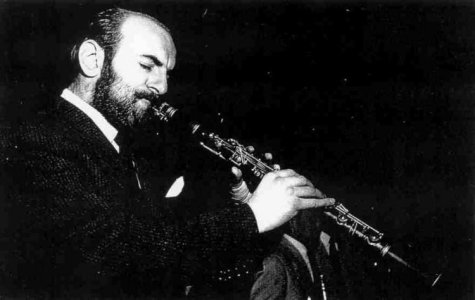 Clarinettist, Sandy Brown was that rarity, an authentic and original voice.

Brown was born of Scottish parents in Izatnagar, Uttar Pradesh, India, where his father was a railway engineer. In the early 1930s, the family relocated to Edinburgh, Scotland, where Brown was later educated at the Royal High School.[1] He taught himself clarinet from the age of twelve. After National Service he studied architecture at Edinburgh College of Art. While there, in 1949, he also started a band with his old school friend Al Fairweather. The two achieved national recognition following a concert at the Usher Hall, Edinburgh, in February 1952. In 1953, the band travelled south and played among other places at the newly built Royal Festival Hall in London. Brown returned to finish his studies in Edinburgh, but Fairweather decided to stay in London.

On completing his studies, Brown obtained a position as an acoustic engineer with the BBC and moved to London, where he reformed his band. In 1957, he collaborated with Al Fairweather in recording the landmark album McJazz, hailed by critic Steve Race as being one of his top dozen jazz recordings of all time.[citation needed] In 1974, he travelled to New York and recorded with members of Count Basie's band. Other artists whom Brown played with during his career included George Chisholm, Kenny Wheeler, Henry "Red" Allen, Diz Disley, Humphrey Lyttelton, Earle Warren, Eddie Durham, Sammy Price and Pee Wee Russell.

This video was featured on a well known jazz website. At one point in the concert Sandy refers to "The Brotherhood of Man". All kinds of suggestions were made about the implications of this remark. "A tune in the repertoire of an Australian jazz group. And similarly inane remarks. On YouTube comments made about what they refer to as "A sloppy Rhythm Section." What seems to totally escape notice is at that moment the streets of Prague and the country was occupied by half a million Warsaw Pact troops and tanks. The actual jazz festival was held as an act of defiance.

'In 1968, the anniversary celebration of the first five years of the festival was planned and the audience, that had only one chance to see foreign jazz musicians in Czechoslovakia, was looking forward to another feast full of stars. From the festival, which was scheduled for October 1968, were finally arranged only two concerts.'

Without a grasp of the realities of history. The real history - not the distorted versions churned out by the winners. How can we safeguard our freedoms?

Am I optimistic?  No. The rote learned versions of history inculcated by the education systems of most counties are never really looked at in an analytical way by most of the population. The old lies are retold and too many people nod their heads and say 'Yes'.