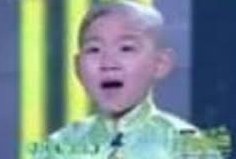 Talent - Where does it come from

Looking on YouTube at Chinese Opera I came a across a truly astonishing video of the seven year old Taoyang Wang. Even if you are not familiar with Chinese Opera - maybe you find it difficult to like or appreciate - you would still be impressed by the effortless virtuosity of this small boy.

How does, one might ask, a small child of seven years of age, acquire a mastery of what is a incredibly and demanding art form? Watching the video you will see mastery, poise, a seriousness of purpose that transforms this child into something quite remarkable. At the end of the video, when he is being spoken to by the presenter of the television programme, Taoyang Wang becomes once again a small boy with the voice and demeanour of a small child.

Traditional Chinese opera or Xiqu, is a form of musical theatre in China with roots going back to the early periods in China. It is an amalgamation of various art forms that existed in ancient China, and evolved gradually over more than a thousand years, reaching its mature form in the 13th century during the Song dynasty (960–1279). Early forms of Chinese theater are simple, but over time they incorporated various art forms, such as music, song and dance, martial arts, acrobatics, costume and make-up art, as well as literary art forms to become traditional Chinese opera.

There are over a hundred regional branches of traditional Chinese opera today. In the 20th century the Peking opera emerged in popularity and has come to known as the "national theatre" of China, but other genres like Yue opera, Cantonese opera, Yu opera, kunqu, qinqiang, Huangmei opera, pingju, and Sichuan opera are also performed regularly before dedicated fans. Their differences are mainly found in the music and topolect; the stories are often shared and borrowed. With few exceptions (such as revolutionary operas and to some extent Shanghai operas) the vast majority of Chinese operas (including Taiwanese operas) are set in China before the 17th century, whether they are traditional or newly written.