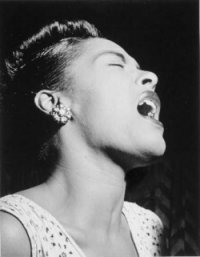 How often do we hear proclaimed loudly by the publicists, in newspapers, in magazines, on radio, on television " Behold the new Billie Holiday " or the linking of some rather average talent to artists - usually dead - who really were great.

It really is astonishing what hype can and does achieve. Constant repetition drives the message in. Large numbers of people consciously or unconsciously fall in to agreement. What a joy for the marketing men who I suspect really do not in general care less about the quality of the product just so long as the message sells tracks, album, ticket, and all the other money making adjuncts.

Recently I was talking to a friend of mine who worked for Granada television during the sixties. Those were halcyon days. Great specific issues programmes such as 'World In Action' costume and contemporary drama made with intelligence and care. Does the commercial television sector now ever put money into wonderful productions such as the acclaimed ' Brideshead Revisited ' to take just one example. No way. Keep it cheap. Stuff the quality and take care of the Bottom Line.

A sad result of all this dumbing down - which in the final analysis is designed to sell more cheaply made products to an ever larger and compliant public - is that there is less and less appreciation of excellence. We are encouraged to think - " I could do that " - without any need for real talent and endless hard work. Stardom - so called - and celebrity has become an end in itself. To be celebrated without having any of the unique qualities once were the reason why individuals became subject to appreciation.

Minority tastes are not really worth worrying about. So say the Bottom Line men. Put jazz on television in a prime spot on a Saturday evening. " Don't make me laugh. Where is there money to be made from that ? ". But here was a time when such things did happen. On both American and British television.

Feed people with pallid substitutes and inevitably they become unable to discriminate between the average and the real thing. Its what we see happening in many areas of artistic endeavour. Crap masquerading as gold.

It would be foolish to deny that there are significant numbers of people of do use judgement and discrimination. People who know the real from the faux. Who become irritated by being asked to believe that Virtual Reality should be their Preferred Reality. When presented with such obvious mediocrity they need to stand up and shout so that the whole world can hear it " The Emperor Has No Clothes ".