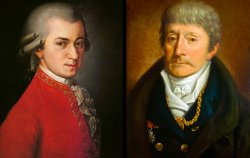 There has been quite a lot of comment recently concerning the notion that 10,000 of practice is the formula to a virtuosity that will transcend mere talent. Do you believe this?  I do not.

You cannot doubt that such a 10.000 hour regimen will lead to a high level of competence in any field. But as a proven threshold to genius and universal acclaim - no way. This is an adjunct to the comforting notion that natural talent does not exist. Anyone who mixes with creative individuals will know that the concept that talent is an illusion will be more than aware that this is complete tosh. I am convinced to that role of talent applies elsewhere to anything from athletics to clog dancing.

You will recall in Amadeus the play written by Peter Shaffer, Antonio Salieri cannot understand why he a man of God-fearing sobriety and high musical skills, is unable to produce the totally memorable music that is composed by Amadeus Mozart. The answer is very simple - Amadeus Mozart had a natural talent that Antonio Salieri did not posses.

It is also true that even the exceptionally gifted have to sweat to achieve. But for most of us even an excess of sweat does not produce comparable creative highs.

Who has the wish to deny that natural talent does not exist? Countless individuals who can comfort themselves with a thought that "Sure I could have done that too. If I had really wanted to.".

The twenty-first century music and celebrity industry elevates the mediocre with a barrage of hype. There was a time when - Fame - was dependent upon achievement. This has been replaced by the marketable commodity of - Celebrity - that needs no tangible basis - it just is. It is seductive in so far as it makes ordinary individuals feel that they too could be up there. If they really wanted to. A marketers dream scenario.

We are not all the same. Some people just have that little extra. It is perhaps combination of perception and can include physical attributes. Fingers that can span that difficult chord. Legs long enough to make a world-class sprinter. To deny the existence of inherent talent is profoundly stupid.

There was a time when I travelled extensively in Europe. Naturally [ ... ]

You Will Never Hear Anything But English Spoken During Your Entire Stay - Our [ ... ]