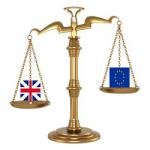 I do not claim to be a prophet, a soothsayer, someone skilled in extracting portents from the entails of recently sacrificed bipeds. What I can say without equivocation, I alway knew that if the eligible voters within the United Kind were give the opportunity to vote on leaving the European Union, the ultimate result would be - leave.

For me, there was no watching live coverage of the voting and the voters. The exit poll sine wave. On that Friday morning I did all my usual computer routines - Email, Facebook, Google various. Only then with the kind a distaste and irritation that usually emanates from having troublesome fragment of food lodged on a molar, I fired up Sage, my RRS, and read the BBC news feed. No surprise, Just profound dismay.

The United Kind public never really grasped that the European Union is not primarily about free trade. It is primarily about politics. The European Unions foundation was a far seeing vision to prevent a repetition of the dreadful chaos of two world wars. And of course why should the United Kingdom reader of daily newspapers be better informed? None of the newspapers, that a majority read, rarely ever had the inclination to inform, in general, their only a remit, to emphasize the negative, and suppress anything that might have an awful tinge of the constructive and positive.

I do not to propose to explore, at this juncture, the manifold reasons, learned and experienced, why I have always had such a pessimistic outlook concerning the predicable outcome of an - Bretix type - referendum. I was both proud and priveleged to be able to regard myself as a citizen of the European Union. There is a sense in which I now feel myself to have become stateless