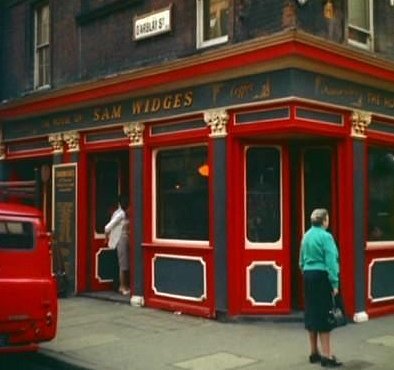 The House of Sam Widges

One of the really interesting features about the Internet is almost stream-of-consciousness mode you can slip into as the direct consequence of a somewhat specific search.

' The House of Sam Widges ' floated into a view. It was a coffee bar with a jazz club in the basement. I became something of an habitué even at one point working behind the counter during the busy lunchtime rush. I discovered that the place was actually owned at some point by one Neil Oram: http://en.wikipedia.org/wiki/Neil_Oram

When I managed at last to separate myself from the downy clutches of The RAF I headed off to London geographically and Soho specifically.

The first time I wandered wide eyed into The House of Sam Widges I was amazed as the friendliness of the crowd. Up they came grasping my hand with warmth, greetings, and wide smiles. "The is for me.". I thought. Silly child - I was around nineteen years old age at the time - and the social perception and naivety of a nine-year-old.

It was only later that I discovered that these practitioners of bonhomie where in fact in the pot-trade, and they shook diversionary hands with everyone. Their clients getting in addition to the friendly grasp a small neat brown paper package containing seven and sixpence worth of grass.

Somewhat later and having become both life and Soho hardened I did a regular gig every Saturday in the basement of The House of Sam Widess playing with a whole host of faces. Some very august individuals would wander in from time to time to jam. More recently Peter King told me that it was there as a very young man Ronnie Scott heard him play and immediately booked him to play at what became know as Ronnie's Old Place.

The House of Sam Widess long gone I suppose - it would be interesting to know just when it ceased to be. Late fifties and in th Sixties Soho was a fascinating place to be particularly so for the jazz fraternity. Happy days.