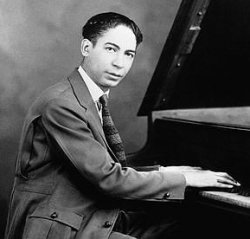 The question Moe Green poses about the absence of compositions of Jelly Roll Morton in the repertoire of the performing bands is one that has interested me from time to time.

Let me say that I have a great admiration for both Jelly Roll Morton and his bands - particularly The Red Hot Peppers. Also, the musicians he employed. They were individuals at the top of their league. For example George Mitchell on cornet - superb. This was carefully arranged music of great sophistication. Without in any way denigrating enthusiastic revivalist musicians the truth is that not many had - or maybe still do not have - the level of musical facility needed to play in a convincing manner Hot Peppers style arrangements.

Great damage was done to many aspiring musicians' development by the totally fallacious notion - much touted at one time - that the acquisition of a developed instrumental technique somehow diluted the purity of the music. Even worse that somehow by some osmotic process New Orleans musicians - and beyond - achieved their mastery without having to woodshed.

I listened recently to an interview with Charlie Parker and the interviewer - who really should have known better - touted the same myth that Parker's virtuosity somehow - just fell out of the sky. Parker soon put him right with an outline of his fifteen hour a day practice routines.

I for one would really love to hear a contemporary band playing Jelly Roll Morton arrangement and compositions - correct me if I am wrong but I cannot recall any band that has made the necessary effort in this direction.

[ Fred Burnett's: Traditional Jazz in the North West of the U.K ]