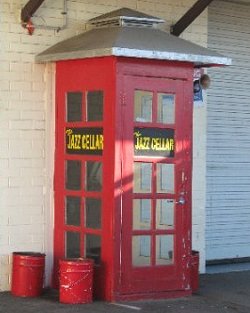 I received this letter from Roy Burton from Perth in Australia. Though he outlines some of the problems confronting jazz in Australia - also applicable to many other parts of the world - his story in general is very heartening indeed. It does go to show, yet again, how much the jazz scene depends upon the enthusiasm of individuals.

I play trombone and saxophone in a traditional jazz band in Perth, Western Australia.  I read your site and note the comments regarding the lack of work for bands and the possible demise of the music.  I'd like to tell you about my experience and perhaps it might give some food for thought.

I have played in Corner House Jazz Band since 1980.  The band has been invited to Sacramento twice, to Malaysia, New Zealand and Borneo.  Since 1980 the band has played at the Railway Hotel in North Fremantle, for a Saturday afternoon session every week. In the early days the pub, which had at the time a floor area of about 100 square metres in the room where the band played, would be packed with up to 300 people.  There were no chairs or tables, everyone stood.  The pub was sold at the time Australia won the America's Cup, about 1987.  All the Fremantle pubs suddenly became worth several times their previous value and most of them changed hands in the lead up to the America's Cup challenge in Fremantle.  America won the cup back and all the pubs went down in value.

The Railway Hotel has changed hands several times over the years.  Fortunately each successive landlord has kept the band on, but the heady days pre-Americas cup haven't returned.

In the 1980s there were as many as six bands playing in various pubs in Perth and Fremantle, on Saturday afternoons.  In every case the landlord paid the band and sought to recover his costs by bar sales as there was no door charge.  Gradually over the years those pubs have been either knocked down or redeveloped, or they have been made into trendy theme pubs.  There are also now small bars, but they are all too small to economically accommodate a band, even if the band played free.

About 20 years ago, the Railway Hotel jazz crowd had diminished and it looked to me that it would be quite likely that the gig would be terminated.  I looked around for another place to play but because of the diminishing number of pubs, I couldn't find anything.  I looked also for a suitable hall, so that we could run our own gig and charge on the door.

My wife and I own a commercial building which has a cellar or about 80 square metres.  I decided that we would convert this into a jazz venue for the band to play in each week.  We would charge on the door and allow people to bring their own drinks.

My wife and I have been avid collectors of advertising memorabilia over the years.  We decorated the walls with early enamel advertising signs, bought old sewing machine bases to make into tables, and bought chairs and church pews at auctions.  We decided to open one evening a week, Fridays, and charged $5 admission and the band shared the takings at the end of the night. In the beginning our audience was pretty much jazz club members, all on the older side and many expecting to have the same seat each week.  It looked like the jazz videos you see on YouTube, where the video is taken from the back of a room and you see all the grey heads in front of the band.

However, over the years our audience has gradually changed.  We now have a strong following from the age of 20 upwards, and the crowd still includes many over 60s.  We have many enquiries to play at weddings, 21st birthdays, 30th birthdays, you name it.  We now turn down more gigs than we accept.Far from young people not liking jazz, they love it.  Quite often young people will come back and bring their parents or grand-parents.

The jazz scene in Perth (and I think around Australia), is contracting and opportunities to play are diminishing.  The whole pub scene has changed but musicians haven't.  They still wait to be invited to play rather than creating their own opportunities.  Consequently as they don't play often, their skills diminish.  When they do play, it's not in a regular band, but they get a band together for the rare jobs that they do.  This means that they play the same old tunes all the time and it all becomes a sort of the lowest common denominator.

Sadly, our band is now the only one in Perth that works regularly.  We still have the Railway Hotel weekly Saturday gig, which has now picked up and is going along quite nicely, although we are still paid the same as we were 20 years ago. The Jazz Cellar, where we play every Friday evening has now been going for 20 years.  It is this that generates our extra work.  We open at 5pm every Friday afternoon for ticket sales and normally are sold out in half an hour.  We now charge $25 and have a capacity of 100, so you can see it's a well paid gig.  People queue from 4pm.  They bring their own drinks and food.  We have an arrangement with a pizza shop nearby who takes phone orders and delivers free to the cellar.

The success of the Jazz Cellar is as much due to the ambiance, atmosphere, and mystique of the place as it is the music.  The venue is tucked away down a lane-way behind a Salvation Army shop, with an old style red telephone box as the entrance.  You go through the phone box and down stairs into the cellar.  The light level is low, lighting is provided by old style oil lamps converted to electricity.  The walls are covered in enamel signs, the old chairs are all different, which gives it a lived in, homely sort of feel.  The tables are all old sewing machine bases with oak tops.  The floor is bare concrete, no carpet or other covering.

Corner House Jazz Band plays each week.  It is a "hot" band.  Although 4 members are over 70, they are not tired old men when it comes to playing.  The bass player joined us when he was 22 and has been with the band about 12 years.  The latest arrival, the drummer is 23, and he has been with us for almost a year.

There are several videos on YouTube and I think Vimeo of the band and the cellar.  All has not been plain sailing all the time.  We had council problems early on as we didn't conform to building regulations for a Public Building.  Later we had licensing problems but the government changed the licensing act to accommodate us.  The Jazz Cellar is listed on the local council's heritage list, for its cultural contribution to the City of Vincent.

What we have managed to achieve is a venue which is exciting in itself, and combined that with a hot band, and created a very close atmosphere.  People love it and we could, with all honesty, play for private functions every Saturday evening at the Jazz Cellar.  The point about all this is that any band could do the same.